Fat Bikes Are Big in Colorado – Here’s Why!

If you are living anywhere along the Front Range in Colorado, you’re living in a sea of white.  Snow that is.  Dreading the bicycle rainer and missing the outdoors, what are your options?  Get a fat bike. You know you want it. Who doesn’t?

Fat bikes were originally invented for winter trail riding and racing in sub-arctic Alaska and simultaneously, for touring the deserts of New Mexico. But they have gained severe popularity! Their utility has expanded to include all forms of cycling; they thrive in snow, sand, desert, bogs and mud as well as riding what is considered normal mountain biking.  In fact, fat bikes are the fastest growing segment in the bike industry.

The biggest plus in newer fat bike models is they’re getting lighter. Bike parts and  fat bike tires are easier to get. And, there are more models to choose from.  The best part?  There are just more people out there riding fat bikes.

There are races too! The 2014 – Abominable Winter Adventure Run and Fatbike Race scheduled for January 25, 2014 is held at over 10,000 feet. This fun fat bike race is an opportunity to get some fun, winter FATtire competition. around an amazing groomed terrain and a Rocky Mountain backdrop.  Get off the trainer and on to your new fat bike!

Discover the fat bike craze for yourself! Look at it. It is waiting for you to come get it. The Fatback 190 20″ at Peak Cycles in Golden, Colorado. 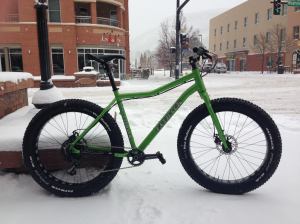 The Fatback 190 20in at Peak Cycles in Golden, Colorado

This entry was posted on Thursday, December 5th, 2013 at 6:13 AM and is filed under Featured Bikes, Peak Cycles Bicycle Shop. You can follow any responses to this entry through the RSS 2.0 feed. You can leave a response, or trackback from your own site.

11 Responses to Fat Bikes Are Big in Colorado – Here’s Why!