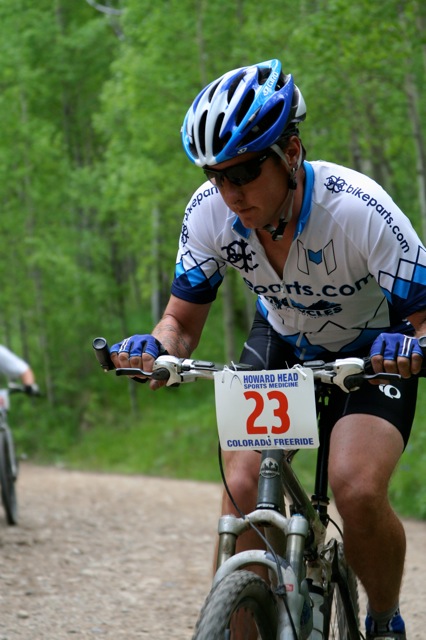 Team Bikeparts.com racer, Jason Kompf, climbing the first of many hills in the Gold Rush Run

The 3rd race in the Summit Mountain Challenge, Gold Rush Run, happened this past Wednesday up in beautiful Breckenridge, CO.  Matt and I headed up to join Jason K on his local trails.  All I knew about the race is the Pro/Elite category was going to have to climb ‘Heinous Hill’, not once, but twice.  Way back in college, somewhere around 1997, a group of us started adding a challenge the steep climbs in Fort Collins by trying to ride them only in the middle chainring.  Since that time, we have all gotten stronger and I have not needed a small ring.  But, last year I was headed to Canada for a big race and decided to put it back on just in case.  Even up there, I didnt need it to use it.   The small chain ring has been sitting on my crankset lonely and unused…until that second climb up ‘Heinous Hill’!  It was STEEP and LONG!!!  Check out the GPS of the race course here and see if you can find the said hill on the elevation profile.

During the race we had some rain, but no really long or hard rain showers.  The craziest part of the whole race was the finish line, it ended at a mine!  I looked up as I cross the line, and there were 5-6 lil donkey burros and a guy with a Miners Hat and in the shed in the back were children panning for gold!  In the end, Matt finished 5th which was impressive that at one point during the race he was leading old Norba Pro and all around sking bad ass, Pete Sweson. I, on the other hand, ended up taking a wrong turn, making the second lap much longer then needed… Oh well, it was a fun race with nice people in a beautiful part of Colorado.  If you have nothing going on Wednesday night, head up to Summit County for a good time on the dirt!

This entry was posted on Thursday, June 25th, 2009 at 12:55 PM and is filed under Races. You can follow any responses to this entry through the RSS 2.0 feed. You can leave a response, or trackback from your own site.