Have you ever done a race where you had to ride a bmx bike, while your partner stood on the back pegs and used a long pole to joust and knock over cones, then race 4 miles through Denver to the next checkpoint where there is another fun activity waiting for you and your partner to complete?  If so, you must have done the Urban Assault Ride!  This was the 3rd year the UAR has stopped in Denver.  I was there 3 years ago and had a great time.  Since then I have race a UAR in Fort Collins, and twice in Boulder.  This year I talked my BC Race bike partner, Tate, into trying a different type of team race.  We dusted off the road bikes, figured out the 2 mystery checkpoints and planned out route. 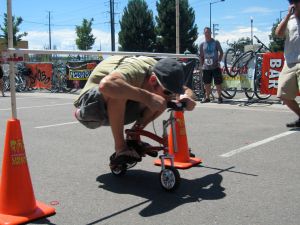 During the race, we had a great time kayaking the lake in City Park, riding big wheels, doing water slides, raced around Wash Park looking for a ‘bike fairy’ and throwing new papers like the kid from ‘Better Off Dead’!  At the last checkpoint, we were leaving and another team asked, “Are you guys heading home?”  It was ON!  We raced by Sloans Lake and into the Invesco Stadium area and made it to the finish only 30secs before the other team.  In the end, it took us 1hour, 40mins to race around Denver.  It was a close race and filled with lots of fun times!  Thanks to Tate for doing such a crazy race with me!  – Jesse Swift

Jesse having fun on the big wheel - from Josh Kravetz

This entry was posted on Monday, July 28th, 2008 at 2:08 PM and is filed under Peak Cycles Bicycle Shop. You can follow any responses to this entry through the RSS 2.0 feed. You can leave a response, or trackback from your own site.