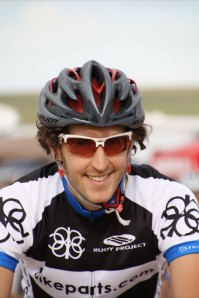 The blood slowly trickled down after the crash. The cooling effect it had on my skin felt a little strange; I was in shock because of the spectacularity of the crash and my focus was more on the blood coming from my leg and less on the trail in front of me. The blood soaked into my sock as I neared the completion of my second lap. Several riders passed me on this short stretch; there would be no third lap for me today. My race was over. The right side of my shin was neatly divided by the half moon shape where the branch had ripped the skin open. One side of the half moon was covered with coagulated blood while the other had red New Mexico clay on it.

I looked down at my hands, there was dried blood where the handlebar met the base of the top of my thumb, almost on the web where it attached to the rest of my hand. It was an artifact of not having any gloves at the start line – the root cause of my crash – i had foolishly left my gloves at home and the handlebar had worn itself through my skin. Too little preparation, too much rushing.

I tried to disappear at the finish line yet I knew he would find me, he was team manager after all. “how did it go?” I turned around to face him. I could see disappointment beneath the goo green Giro helmet before I even told him I didn’t finish. He already knew. I knew he had finished his race, but his goal of winning the Mountain States Cup as a team was evaporating, partially due to my first DNF. It was a turning point for me, at the time i thought the race was too hard for me, and i wondered to myself if i would ever have the talent to compete with Colorado racers. There was much training to do, there was much confidence to build. This took many years to accomplish; because looking back I had to starting at the beginning, an unprepared dust covered racer whose leg was killing him. It was my last race as a member of the Dean Team. I never saw the goo green helmet again.

I named it Angelfire, the half moon shape running down my right leg, the reminder of who i once was a decade ago and how far i have come since then. Angelfire grew over time, expanding little by little as the years went by. Season after season and year after year i began to crash less and less frequently, and i became fond of the old scars and the memories they held, maybe it was because I had fewer and fewer new ones. They symbolized a barometer of how far i had come. They were the changing weather pattern of my life; seasons and years as I came to understand work ethic, training, nutrition and diligence – it was a wonderful journey.

Last summer at the Winter Park Hill Climb a bearded guy called over to me at the race finish line. At first I didn’t recognize him; maybe he was missing his goo green helmet, but sure enough it was Jesse, my old team manager. I see that he had changed too. He invited me to race an urban assault in fort Collins, and I gladly did so. While waiting for awards, I asked him if he would be interested in doing a stage race together. He said he would think about it.

This past weekend I raced my first race of the year, a 24 hour at ERock. Needless to say I didnt know anyone at the start line, but then again maybe they didnt recognize me either, because i was wearing new team colors. I was riding for the same team as Jesse. After some fast laps and nighttime mechanical mishaps we rode into 3rd place for the 8 person team. It was a great way to start the season.

Consider it an open invitation at some point in the future. Maybe the Alps or Andes will call, or maybe it will be a Crocodile Trophy, but most of all consider it a second go; something which rarely occurs in life. Redemption to somehow go back, embrace the past and what was learned from it; how it made you stronger and smarter, and how most times failure can bring success around. I will wait for the call, email or text inviting me to race the stage; understanding that because of mortgages, family and schedule it may never come. It could also be my own schedule, family or mortgage, but no matter; i promise this time to only bring scars with me, try not to make any new ones and most of all i plan to pack gloves, at least two pairs.

This entry was posted on Friday, June 8th, 2012 at 9:01 AM and is filed under Peak Cycles Bicycle Shop. You can follow any responses to this entry through the RSS 2.0 feed. You can leave a response, or trackback from your own site.

One Response to Mountain Biking through Miguel