The ever elusive BCA or back country adventure (as its known)

Ever since mid March Colin and I have heard about the BCA from one Parker.  It was all about the BCA on and on, but the only issue was, there was never a BCA to be had.  Everyone knows that resort access gates, shuttling a pass, side country, slack country isn’t back country.  Right?

Since December and May switched on us this year it’s still ski season right?  That has given Parker plenty of time to get his real BCA in, with more to follow hopefully?  Right?  Less than two weeks ago the snow was setting up, turning into ripe corn, and the sun was out.  Well it all changed with a high avalanche danger, unstable snow, and white out conditions.  (in may?)   We did the best we could with the “minor” early May snowstorm and did a healthy climb and were fortunate to make some quality turns in a couple places.

So the question is does one race a mountain bike next Saturday at Bear Creek or do we pray for sun and stable snow and go skiing?  Where else could you be forced to deal with such troublesome problems. 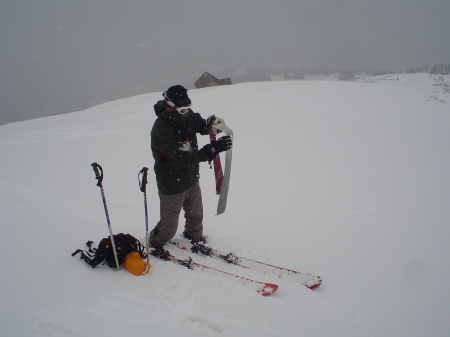 This entry was posted on Monday, May 3rd, 2010 at 6:07 PM and is filed under Peak Cycles Bicycle Shop. You can follow any responses to this entry through the RSS 2.0 feed. You can leave a response, or trackback from your own site.