Epic Eric.  You dont get a nickname like that doing your casual, everyday, normal rides.  If you think you have done a big, “epic” ride, mostly like Eric has done 5 times the distance in below zero deg weather at 18,000 feet in another country on 1 clif bar with no map!  No kidding!

Eric in Tibet or Nepal or Mars

I met Eric in college in an engineering class we had together.  We were also riding for  CSU on the cycling team together, so we became roommates.  It was then I could tell he was going to go a different route.  On the weekends I  was heading to CORPS races and he was going to Rocky Mtn National Park for epic mtn climbs.  After college, Eric worked in Denver as a Civil Engineer, but Colorado proved to be too small for him.  He is now up in Alaska making frame packs and other cool things to pack as much as you can on a bike… 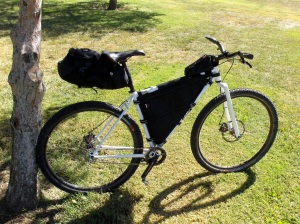 If you are planning a BIG ride soon, shoot Eric an email and he can make you a custom pack for your bike.  And who knows, maybe some day you may earn nickname like Marathon Mike, or Ambitious Aaron!

From riding the Alaska Pipeline to the desolate deserts of Bolivia, this photo essay is from my collection of Epic Eric photos I have collected over the years.  Keep exploring Eric, you inspire us all!!  Much respect brother, Swift

Eric in Tibet or Nepal or Mars

This entry was posted on Monday, December 8th, 2008 at 5:08 PM and is filed under Peak Cycles Bicycle Shop. You can follow any responses to this entry through the RSS 2.0 feed. You can leave a response, or trackback from your own site.

Leave a Reply to Epic Eric and his Mukluk « Cancel reply